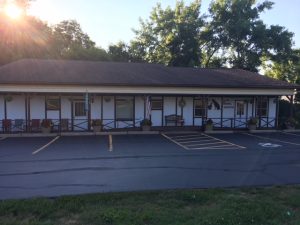 Avon Animal Hospital has been serving the animals around Avon, NY since its establishment in the early 1900s by Dr. Frank Cleaver. Originally located at 83 E. Main St, the clinic treated both large and small animals. Through the years several veterinarians have been part of the clinic and carried on the tradition of service to the community and its four legged members.

Dr. Christian Haller (1918-2009), a 1942 graduate from Cornell’s College of Veterinary Medicine, returned from his service in the Merchant Marine during World War II to work in the Large Animal clinic at Cornell. In 1946 Dr. Haller was approached by the head of Cornell’s clinic and informed that Avon was in need of a veterinarian upon Dr. Cleavers passing. Dr. Danks comment of, “You need to go there,” was not to be argued with. Dr. Haller continued to practice large and small animal medicine from the east main street location until 1960 when he built the animal hospital that is now located at 405 Rochester Street in Avon. He continued the tradition of treating both large and small animals until 1967 when he expanded the hospital and dedicated the practice to 100% small animal care. During his career, Dr. Haller served on disease control committees, was active in the New York State Veterinary Medical Society(NYSVMS), and even served as president of NYSVMS in 1986.

Early in 1986 there was to be a change at Avon Animal Hospital. Dr. Wayne Warriner, a 1967 graduate of Cornell’s College of Veterinary Medicine, was looking for a veterinary practice to purchase and ran a blind ad in the NY state veterinary newsletter. One evening the phone rang and the booming voice on the other end said “This is Chris Haller, you should buy my practice.” As president, Dr. Haller had leaned on the executive secretary to give out Dr. Warriner’s name and number! Dr. Warriner took over the practice in October 1986. He worked with associate Dr. Robin Kirkner until health issues forced Dr. Kirkner’s retirement.

In July 2014, Dr. Jennifer Marvin, a 2006 graduate of Cornell’s College of Veterinary Medicine, moved to Avon and joined the practice. Starting to contemplate retirement, Dr. Warriner had again run an advertisement in the NY veterinary newsletter. In 2013, Dr. Marvin saw the ad and inquired about a practice for sale in Livingston County New York. Following history, Dr. Warriner tracked her down at a veterinary meeting and said, “I want to talk to you about purchasing my practice.” Dr. Marvin became the primary owner in 2016 with Dr. Warriner entering semi-retirement.  Dr. Warriner fully retired and hung up his stethoscope in 2019, but can still be found hanging around the office for a cup of coffee while he catches up on how everyone is doing.

Together Dr. Marvin and all the members of the team at Avon Animal Hospital, including their hospital cat, continue to carry on the tradition of providing the best, complete care for the four legged members of Avon and the surrounding communities.

We will do our best to accommodate your busy schedule. Request an appointment today!

Font Resize
Contrast
Accessibility by WAH
Call Us Text Us